Ushering in this change was the massive response to financial crisis and the Great Recession: Troubled Asset Relief Program (TARP) and quantitative easing (QE). TARP was meant as a short-term elixir to kick-start a malfunctioning banking system, while QE was never supposed to become an embedded, institutionalized policy. Yet, the last decade saw the second, third and “twist” iterations of this experiment, each intended to address a unique market dislocation along the way. All tolled, the Fed’s balance sheet grew 81.0% over the decade to $4 trillion. (See Chart 1). 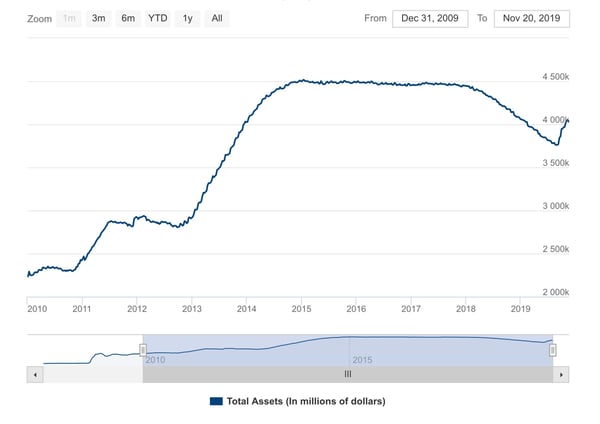 This policy accommodation has had benefits. Over the decade gross domestic product (GDP) has grown from $14.4 trillion to $20.2 trillion unemployment has fallen from 9.9% to 3.6% and the S&P 500 has rallied a mere 178.9%. There have, however, been tradeoffs. QE has suppressed interest rates, and led to the buildup of federal debt from $12.3 trillion to $22 trillion, a record 103% of GDP. Despite the massive liquidity injections, economic growth has averaged a stagnant 2.5%. And while nobody complains about stock market gains, QE has ushered an era of asset prices impacted by money flows as much as by fundamentals.

The European Central Bank (ECB) now owns $4.6 trillion in financial assets. The Bank of Japan (BoJ) holds Y575 trillion. The size of these balance sheets limits flexibility, as witnessed by the “taper tantrum” in 2013. As such, we enter a new decade with monetary and fiscal policy a fixture in financial markets.

If you would like to be notified when we release our upcoming articles
in this Decade in Review blog series, please sign up here.

Source: Stats in this article are from the Fed.