A Tour of the World’s Economies and a Case for U.S. Equities

It seems like the fourth quarter’s stock market selloff just happened yesterday, but we’ve already had a full recovery. Things have changed quite a bit - especially the Fed backing-off its intentions to continue raising rates. Let’s take the pulse of major world economies to see where things currently stand.

China is a good place to begin, since it’s the second-largest economy in the world - larger than the economies of Japan, Germany, and India combined. Most believe the economic statistics that come out of China are manipulated by their government. How else could Chinese GDP stay in such a narrow band between 6.4% and 7.0% for the last four years? The Chinese stock market may be a better indicator of economic health, and the Shanghai Shenzen stock index is near the same level it was four years ago. Many believe that the Chinese economy could get a big boost if the trade dispute with the U.S. is settled, but we have our doubts. It has gone on for a year now, and many U.S. companies have found ways to diversify their supply chains and lower their exposure to China. There is no reason they would put all of their eggs back in the China basket even if the trade dispute is resolved. 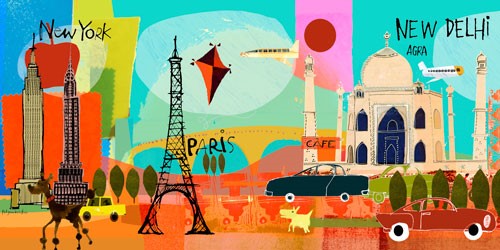 Japan is the third largest economy in the world. As we discussed in last month’s Dana newsletter, they have a huge demographic problem as their society ages and doesn’t grow. Both Japan’s GDP and population are lower today than they were twenty years ago. The entire population of the country has a deflationary mindset. They hesitate to invest long term and take risk, and the populace is very resistant to any type of price increase at the consumer level. The Nikkei market index is actually lower than it was thirty years ago with dividends reinvested! It is highly unlikely that this will change in the next decade or so. As they say, demographics is destiny.

We can look at the European Union as a whole. Some countries are in better shape than others, but with limited border controls and a common monetary system, the fate of one country in the EU is very dependent on the fate of the others. Europe has a debt problem, a demographic problem, cultural assimilation problems, regulatory problems, unemployment problems, etc. The list is long, and most of these issues have not been addressed. EU GDP is at the same level it was a decade ago. An index of the top fifty stocks in Europe is still below its 2000 and 2007 peaks. Many have looked to the European markets for recovery and outperformance relative to the U.S. market for the last few years. It hasn’t happened, and the prospects don’t look especially good from here.

The emerging markets of India, Brazil, Mexico, South Korea, Russia, and others can be looked at together and also have by and large barely recovered to their previous 2007 peaks. Most of these countries are export-centric or dependent on exports of raw materials in order to generate income. With commodity prices suppressed and overall world economic growth still weak, these markets will most likely continue to struggle until those two major factors change.

Rounding out our world tour, we circle back to the U.S. First quarter earnings have begun to be reported, and they are coming in about as expected. S&P 500 earnings for the first quarter are actually forecasted to be down slightly from the first quarter of 2018. If this prediction is correct, it would be the first quarter of lower year-over-year earnings since the energy induced earnings recession of 2015-2016. During that period, the S&P 500 experienced two corrections of over 10%. A low bar has been set for earnings growth this year, as analysts expect growth of about 4% across S&P companies. If companies are able to hurdle this low bar, further equity market gains could still occur this year, even from the current record levels.

Most of us naturally end up focusing most of our attention on events near us rather than far away. We can grouse about the weak earnings growth, political infighting, expensive markets, and other difficulties that face us here, but many of those problems pale in comparison to those faced in other parts of the world. On a relative basis (a phrase we investment managers love), the U.S. does seem to have issues that are far more manageable than those that face other countries.

The universe of acceptable investments for ESG and SRI funds may be limited as compared to other funds.  Because these funds do not invest in companies that do not meet their ESG or SRI criteria, and may sell portfolio companies that subsequently violate their screens, they may be riskier than other funds that invest in a broader array of securities.