Active Management - The Cyclicality of Outperformance

Value versus growth. Small-cap versus large-cap. Active versus passive. The equity markets are inherently cyclical, and sometimes a cycle can last for so long that it’s easy to forget the last time a certain factor or style was in or out of favor. These days, it seems like the style that has been out of favor the longest is active management. 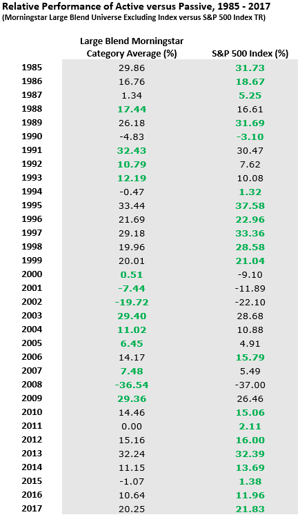 Consider the relative performance of active large cap core equity managers against the S&P 500 Index. Looking at the table on this page, it’s easy to see multi-year streaks where either passive or active products outperformed. For example, actively-managed funds, on average, outperformed in nine out of 10 years between 2000 and 2009.

Since 2009, passive has outperformed in every calendar year. In fact, according to Morningstar’s Active Passive Barometer semiannual report, only 38% of active U.S. stock funds outperformed their average passive peer in 2018, down from 46% in 2017.1 But interestingly, when looking at the above table, you can see that the periods of sustained outperformance (2000-2009) or underperformance (1994-1999, 2010-2018) have been anywhere from six to 10 years in length. Considering the current stretch of underperformance has lasted for nine years, it begs the question of whether we should expect to see mean reversion in the near future.

A pronounced bear market could be a catalyst for such mean reversion, since many active managers favor higher-quality stocks which tend to hold up better in periods of market distress. Regardless of the driver, we wouldn’t be surprised to see the pendulum swing back toward active management given the length of time this style has been out of favor.


1,The link(s) above open new windows that are not part of www.danafunds.com.