As more and more money has flowed into passive index funds and ETFs, there has been growing concern over the level of influence these providers, such as Vanguard and Blackrock, have in terms of proxy voting. Assets in passive products have ballooned, and passive portfolio managers have been forced to buy more and more shares of index constituents, resulting in them being among the largest shareholders of many publicly-traded companies.

As background to proxy voting, investment management companies may cast proxy votes for the securities in their portfolios, such as on behalf of mutual fund shareholders.1 These votes often take place at annual shareholder meetings. Votes take place on important issues such as mergers and acquisitions, the compensation of C-suite employees (which can be tens of millions of dollars), and the election of directors. 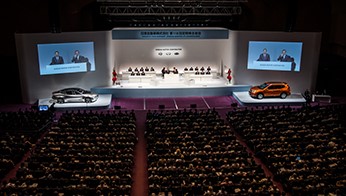 The primary concern around passive managers’ increasing influence is centered around this notion: despite owning a significant portion of the voting shares of a company, they are not incentivized to take an active interest in the company.

Said another way, passive managers are “blindly” buying stock in thousands of publicly-traded companies; not because of the value or forward-looking prospects of the company, but simply because they are constituents in the various indices their products track.

For example, even for a firm the size of Vanguard or Fidelity, these companies cannot intelligently vote on the various issues facing all 2,000 companies in the Russell 2000 Index.2 In March 2018, Dick Weil, CEO of Janus Henderson Group, penned an Op-Ed in the Wall Street Journal entitled, “Passive Investors, Don’t Vote,” in which he urges the SEC to issue new guidance asking passive investors to abstain from shareholder votes, noting that prior SEC guidance helped create the problem in the first place3:

“Until recently, asset managers in the U.S. that lacked a well-informed view of the companies in which they invested often abstained from shareholder votes. That changed in the 1990s when the Securities and Exchange Commission began suggesting that routine abstention could be viewed as a failure to carry out one’s fiduciary duty. Today nearly all asset managers vote, but passive investors dedicate no more effort to the process than is required to appease the SEC — or perhaps to satisfy their own conscience and to boost their firm’s image. The SEC should acknowledge the diluting effect of these votes and reverse their guidance on abstentions.”4

In any case, at Dana we are active both in the management of our portfolios and with the companies we invest in, and feel it is imperative to take a direct stand for our clients in certain cases. A recent example is our holding of Dell Technologies Class V, or DVMT. This is a security that was issued – or sold – less than three years ago by Dell Technologies to track their interest in VMware, a growing software company owned by Dell. Dell now wants to retire – or buy – the DVMT stock in exchange for cash and shares of Dell Technologies Class C, their core business. The key to the transaction is the amount of Class C stock they intend to issue for each share of DVMT. In the five months prior to Dell’s initial offer for DVMT stock, Dell’s internal valuation of its core business increased by nearly $30 billion, or +150%. This was convenient. Prior valuations were for purposes of stock grants, where a lower value accrued to more Class C shares for executives and insiders.

As Dell contemplated using the Class C stock as deal currency, establishing a higher core Dell valuation was preferable. The higher the value of Class C shares, the fewer needed to buyout DVMT shareholders. Our analysis does not support the deal valuation, and we do not believe our clients are being fairly compensated. Less than three years after selling DVMT for a full dollar, Dell has offered to buy DVMT for sixty cents. Meanwhile, DVMT’s contractual rights have not changed. The magnitude of the discount is ethically concerning and raises serious corporate governance concerns.

We felt it was important that we take a stand for fair and proper corporate governance. To that end, we wrote two letters outlining our position in detail. One was addressed to Michael Dell and the independent committee of the DVMT Board, and the other to VMware’s independent committee. The letters can be found here. On November 15th, Dell caved to widespread shareholder discontent and raised its bid for DVMT. We expect the deal to close under the new terms. Dana is happy to claim a victory for fair corporate governance, and more importantly, our clients.

We have always believed our duty extends beyond the basic functions of portfolio management to include the voting of company proxies. In some cases this also includes advocating on behalf of our clients for better environmental, social, and governance (ESG) policies at the companies in which we invest, which will likely be the topic of a future ESG blog post.