Are Small Cap Stocks Poised to Bounce Back?

Large-cap stocks have had quite the run recently. Who would have thought the tenth year of the current bull market would bring a 31.49% return for the S&P 500 Index - its strongest yearly performance since 2013? Considering the long-term average length of equity bull markets is a shade over seven years, 2019’s epic performance will likely stand out in investors’ minds for some time.

The fourth quarter was especially strong. Despite stumbling during the first two days of October, the S&P 500 Index reached new highs 22 times during the quarter, including nine records in the final 13 trading days of the year. While small-cap stocks participated in this rally, they still lagged large-caps for all of 2019 with the Russell 2000 Index up +9.94% for the quarter and +25.52% for the year.

While nobody should be complaining about such robust late-cycle returns, the underperformance of small-cap stocks is a bit confusing. Investors were in a risk-on mentality during much of 2019, and typically in this environment, “riskier” assets, including small-cap stocks, are expected to outperform. What is also perplexing is the lack of effect that the ongoing trade-war related headlines had on large cap stocks, since large cap companies tend to be more global in nature compared to the more domestic footprint of small caps’ business models.

The primary driver of this disconnect was the dominance of large cap technology stocks.  For much of the year, Microsoft, Apple, Amazon, Alphabet, Facebook and Netflix hovered around 20% of the S&P 500 Index and benefited from both strong earnings results and flows from passive vehicles.

However, just by looking at the past five years (shown below), one can see that 2019 was more of an outlier than the norm. In fact, small caps still boast stronger performance over very long time periods. 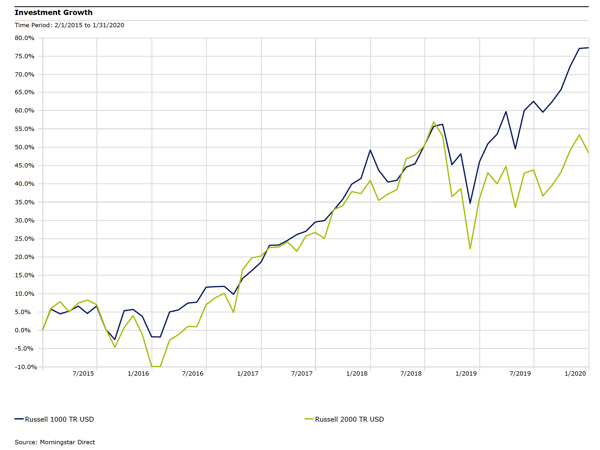 So how could the tide shift in favor of small cap stocks again? Investors paying more attention to valuations could be one catalyst. Small caps’ underperformance has resulted in them being priced at very attractive levels relative to large caps. According to an article published on CNBC this past fall:

“Valuations for small-cap stocks are at their most attractive levels since June 2003 relative to large caps, according to data compiled by Jefferies. Historically, small caps have outperformed large caps by an average of 6% over the following year when the valuation gap widens that much.

The article also goes on to mention that small caps have historically outperformed large caps when the U.S. central bank is lowering rates. “Small caps average a 12-month return of 27.9% after the Fed embarks on an easing cycle, Jefferies data shows. Large caps, meanwhile, average a gain of nearly 15% in that time.” 2