How Far Can the Economy Go with the Low Fuel Light On?

The current U.S. economic expansion has now passed the ten-year mark, and has set the record for the longest expansion on record. During that period, we have had three quarters of negative GDP growth, but in every case the economy bounced back the following quarter. The discussion has now moved to how to keep this expansion going. We can review the headwinds and tailwinds that currently coexist in the economy, but ultimately, we have to focus on the elephant in the room that underlies the Federal Reserve’s concern - the inverted yield curve.

First let’s look at what is working. The unemployment rate has been at 4% or below since last spring, and even with some signs of economic slowing, there is no indication that the rate will rise materially in the near future. Other labor market indicators that could indicate an overheating labor market would include weekly hours worked and capacity utilization and neither has moved up significantly in recent months. Some point to average hourly earnings growth moving above 3%, but this just moves wage growth back to the long-term average after a decade of subpar growth. New and existing home sales have remained strong, and growth in home prices has slowed somewhat, which may bode well for a continued strengthening of the housing market. Reasonable home price growth prevents prices from significantly outpacing income growth. The stock market has provided the big positive surprise this year, although you wouldn’t know it from reading the economic headlines. The S&P 500 is now up over 20% in the first seven months of the year. The bond market has participated as well, with Treasuries, agencies, and corporates all showing strong total returns this year.

There are reasons to worry, and China and tariffs are one concern. The tariffs have not seemed to make a significant dent in overall economic growth, although they have led to disruption in some industries and caused significant supply chain modifications. Overall global growth has been voiced as a concern by the Fed, and they seem to be more concerned that slow overseas growth could be more of a drag on our economy than it has been in the past. Market valuations in the U.S. are a concern, as earnings growth has slowed and the price to earnings ratio of the S&P 500 has moved back up to near 18 times. It is also troubling that small cap stocks have not fully participated in the move to new market highs, as the Russell 2000 index is still down almost 8% from its high last summer. 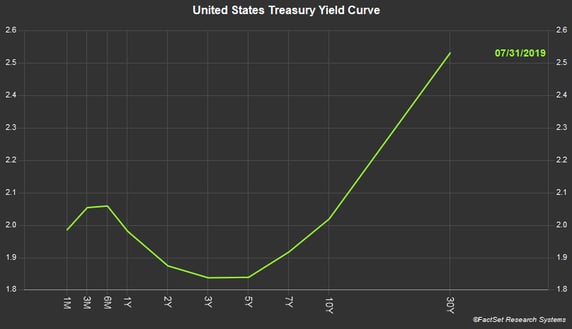 It seems to us that the elephant in the room is the yield curve. A negatively sloped yield curve can be telling us many things about the economy and the markets. It can tell us there is an aversion to risk taking. It can be telling us that there are too few investment opportunities that can be perceived as fairly priced. It can be telling us that market participants are concerned that economic conditions will weaken soon. The Fed can address a flat or negative yield curve by cutting rates, and time is of the essence. The irony for the Fed is that if they move more aggressively to lower rates, they may not have to cut as much as they will if they drag their feet. The three-month Treasury bill has had a yield above the ten-year Treasury for about nine weeks. If the economy is a car, the analogy would be a low fuel light that comes on. Can you keep driving for a while? Sure, but the risk increases the further you go. After the most recent Fed decision, yields on the short end of the curve rose and rates on the long end of the curve fell. The stock market fell. Chairman Powell, it is long past time to listen to the markets.

If you would like to be notified when we release new market insights, please fill out the form on the right, "Stay up to date with current market trends," and we will send you an email.