Infodemic: Reflecting on Coronavirus Statistics and the Market Selloff

Fear is the virus on which the news media thrives.

Viruses are with us everywhere and always. Illnesses defined under the umbrella of influenza kill between 10,000 and 50,000 Americans each and every year. Total annual deaths in the U.S. are about 2.8 million, so influenza makes up less than 2% of those deaths. Video of personnel in gowns and masks carrying sprayers invoke the fear response.

So what do we know so far about the current Coronavirus?

Like most flu strains, it preys on the elderly and the infirm. So far, death rates have been significantly higher for those over 65, with the death rate increasing with age. 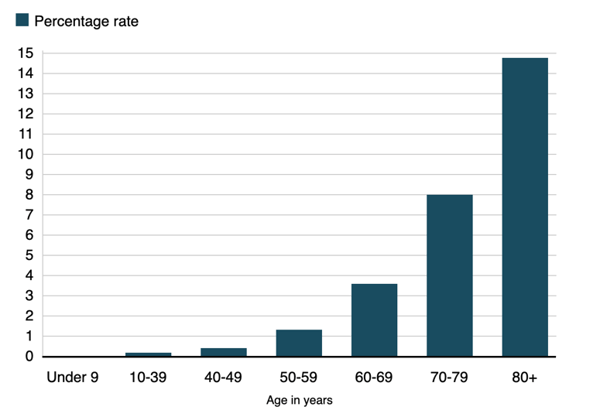 Respiratory disease and diabetes also significantly increase the mortality rate. This is unlike the 2009 Swine flu in a good way, which preyed upon the younger and most productive. Most flu strains end up infecting a significant portion of the population. It is likely there have already been far more unconfirmed than confirmed cases, which would mean the actual mortality rate is far lower than the current published rate. The mortality rate for those who are healthy and younger is also significantly lower than the average.

“Researchers currently think that between five and 40 coronavirus cases in 1,000 will result in death, with a best guess of nine in 1,000 or about 1%.”1
~ Robert Cuffe, BBC News Head of Statistics

There are a number of current responses that will probably help reduce the transmission rate and the mortality rate for this epidemic, at least among the developed countries. Hygiene is the most important, as more people take precautions and wash their hands. The main human behavioral response is to reduce gatherings. That is also taking place. The medical community will dissect the genome of the virus, and this will enable some sort of vaccine to be developed. Warmer weather in the northern hemisphere may slow transmission, although this is yet to be seen. When the virus is identified earlier, it will allow the medical community to more aggressively treat those who have been infected, probably again lowering the mortality rate.

Fixed income investors have been the beneficiaries of the pain in the equity markets, as rates have fallen significantly. Corporate spreads have widened as equities have fallen, but lower Treasury rates across the yield curve have provided a tailwind to all fixed income. If markets do not stabilize soon, expect the Fed to react either with further comments or actions. Recent market volatility highlights the value that owning bonds within balanced portfolios can provide to long-term growth and stability.

We have had a sharp market correction in the last week, with most market indices declining 10% to 12%. Corrections can happen for many reasons, and they are not terribly uncommon, although they have been less common during the current economic expansion. Will this outbreak reduce economic activity? Yes, but probably only temporarily. All virus outbreaks are serious and result in a tragic loss of life, but this virus outbreak does not necessarily seem to be more deadly than those that we have had in the past and will have in the future. One significant positive this time around is that it does not seem to attack the healthiest in our society as some past epidemics have. The markets seemed to show some signs of stabilization into the close on Friday, and we will monitor events closely and adjust portfolios accordingly.

Some relevant articles are linked below: