Mutual Funds' Pro-Growth Sector Bets Could Be a Timebomb

Peter Lynch, the former manager of the Fidelity Magellan Fund, has a famous story about three cocktail parties he attended as the market was moving through different phases. At the first party, at a time when the market is down, he tells people he’s a mutual fund manager and they quickly walk away to go speak to a dentist. At the second party, when the market has been moving upward, people listen to him about stocks for a little while before losing interest and again seeking out the dentist. But at the third party, when the market has been rallying for a while, not only do people intently listen to him talk about stocks, but they give him stock recommendations of their own!

While this story illustrates how ordinary people tend to chase stock market performance (while potentially indicating the top of the market), the same patterns exist in the professional money management space. Portfolio managers often become overconfident in their winners, and similarly tend to overweight sectors (versus their benchmark) that have been performing well. This behavior reflects some very common psychological biases which actually serve us well in other aspects of our lives. For example, a sports coach will play his or her best players every game, and a farmer will favor areas of land that have produced well over time. But the financial markets introduce a level of cyclicality that makes it dangerous to favor investments with positive momentum for too long a time period. 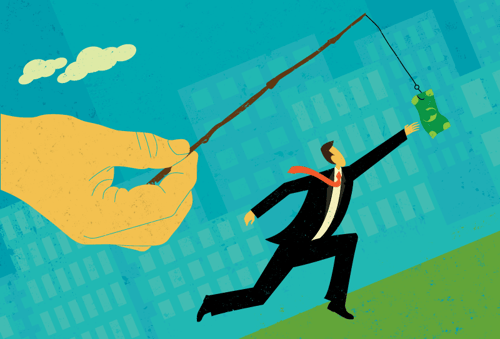 Throughout 2018, active managers have been loading up on Information Technology (IT) stocks such as the “FANG” names (Facebook, Amazon, Netflix and Google) which have been performing strongly. But when Facebook missed its revenue estimates in late July, the stock sold off 20% and the selling had a spillover effect that hit Netflix and Alphabet as well. The heightened volatility in the technology space has led active managers to now chase performance in another sector that has been a strong performer - Healthcare1 - although the average mutual fund is still overweight technology.

The rotation from one strong-performing pro-growth sector to the next is unfortunate for a few reasons:

Analysts across the active-management industry bring a significant amount of stock-picking expertise and experience to the table. But we believe they likely get too excited about certain areas of the market. As mentioned above, many seem to be setting themselves up to be whip-sawed in the event that the economy cools off and everyone rushes to defensive or value-oriented sectors at the same time.

At Dana, we long-ago chose to manage our portfolios with a sector-neutral discipline, choosing instead to focus on picking what we believe are the very best stocks within each industry. Not only is this a more-efficient use of our time, but it prevents us from falling into the psychological biases of trend-chasing and overconfidence. A sector-neutral approach also immunizes our clients from the additional volatility that can result from dramatic sector rotations and shifts in investor sentiment, which has contributed to our funds’ attractive risk-adjusted returns.